On Thursday, the G1 mobile phone was finally released in the UK, and - ignoring the sensible policy of not getting first-generation devices - I ordered mine as soon as the website was available. (Which was at 11:30 - two and a half hours later than T-Mobile had said.)

A short while afterwards, I was pleased to find that T-Mobile had left me an answer phone message asking me to contact them - most times I find companies don't bother leaving answerphone messages, which is very annoying. They also emailed and texted me the same request, which was nice, since it made sure I was notified.

The CSR on the end of the phone was polite and friendly and, after providing the correct information for a credit check, she confirmed that the phone would be delivered and arrive between 8am and 1pm on Friday. It's nice to get free next morning delivery.

I got a black G1, because the white one is eugh, although for some reason the white model is the more popular.

Fortunately I only live a short distance (10 minutes normal walking speed) from work, so Friday lunchtime I rushed back to pick it up, only to be greeted with a Royal Mail failed delivery note. Argh! There were almost certainly people in at the time. So I dejectedly walk back, and along to the restaurant where we're having our weekly department lunch. My colleagues had especially chosen a table near a plug socket in case I needed to charge the device, and share my woe about the lazy delivery person - it's apparently not uncommon for them to fill out forms and slip them through the door without even knocking.

Saturday morning, and I set out to the Royal Mail Delivery Office, hoping there wouldn't be long queues... but was dissappointed to find the small room filled with nearly a dozen people. However, the three staff were reasonably efficient, and it wasn't long before I was handing over the delivery note, signing something, then skipping away with my parcel.

Back in the car, I open the package to get at the box. A moment of worry at seeing a white G1 image on the box fades as I discard the outer sleeve, flip open the inner box, and see my lovely new black G1. Many people are saying the device is ugly, but I don't really understand why; it's fine.

A little smaller than you might think from images you've seen, the G1 - or, perhaps more specifically, the HTC Dream (which is the hardware the G1 uses) - is thinner and flatter than my old XDA Mini S (HTC Wizard 200), and maybe a centimetre longer. It fits nicely into my hand. It smells nice too. 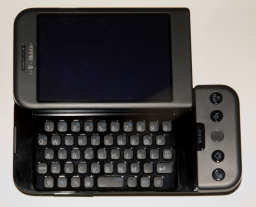 The sliding screen is awesome. It makes a lovely clonk sound as you open and close it. I could clonk-clonk it all day long. Um.

The keyboard under the screen is acceptable... the buttons are a bit flat, and and almost-square, but a bit taller, spaced out a little bit more than they need to be. This is unlikely to bother most people, but I'm picky about my keyboards. 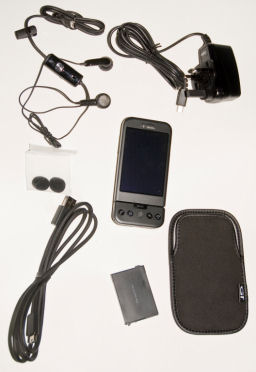 After a bit, I put it all back in the box and drive off before the traffic warden gets to me, in case she wanted to be fussy about my parking ticket having just expired. It's not long before I get back and am looking through all the box contents, and taking photos of the device.

The G1 runs Android, a Linux-based Operating System, developed by the Google-led Open Handset Alliance. This was one of my key motivations for getting the G1 - I want an Open platform which allows me to use my phone as I please (unlike the locked nature of the iPhone, where Apple require developers to pay to develop for the phone, be US residents, over 18, and so on). Android is Open Source - anyone can download the sourcecode and develop applications for it.

Turning on the G1 and going through configuration, it took me a little getting used to the touch-screen buttons - my last device used Windows Mobile which required a precise point, so my instict is to use my fingernail. With the G1, you just press the button, more intuitive (if you haven't trained yourself to act otherwise). 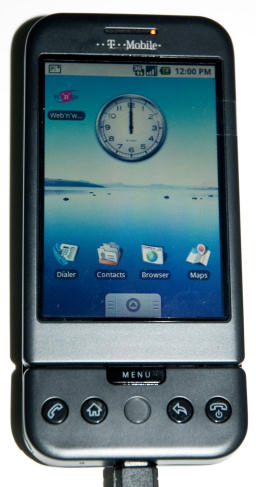 The screen is nicely defined, bright, sharp, and colourful. No sun today, so how it fares in direct sunlight is yet to be seen, but I suspect it'll be fine.

The desktop is three screens wide, which will allow plenty of icons/widgets within easy access - simply slide a finger left or right to access the side desktops, or scroll the trackball off the edge.

The status bar at the top contains the usual type of icons, with further details obtainable by sliding it down with your finger, and the menu is accessible from the bottom of the screen with the same sliding action.

For moving around the main interfaces, the trackball is simple and straightforward to use. When it comes to navigating/editing text, the trackball takes the place of cursor keys, and requires a little more precision, particularly when selecting text.

Overall, the G1 is usable and responsive, and I like it. I've had it switched on for less than two hours, and have yet to fully play with all the features - I've poked around the settings, done a bit of web browsing, google maps, and read some mail, but there are still plenty of things to try out.

After I have used the device a bit more, I will be updating this entry with more details.

Ok, so this update took longer than intended to post, but the positive side of that is that it has given me more experience with using my new Android-driven G1, so it is a bit more accurate than it was going to be.

On the whole, I enjoy using my G1 and it makes me happy. It's not perfect, but I wasn't expecting perfection from a 1st-generation device.

To begin with I'll mention the things which bug me - bear in mind that I'm a very picky person; these things wont necessarily annoy everyone...

The four buttons on the front of the G1 are flat - flatter than the fake display models in the shops - and this can make it difficult to identify the buttons without looking. There is a smoother texture to them, but I don't find it enough of a difference to make it easy to locate them by touch.

Using the keyboard with the a USB cable attached (charger, headphones, etc) is very awkward. Although you might think the base block alone is disruptive, it is quick to get used to this and it not to be an issue. However, with the USB socket in use, typing is much more difficult. Without a cable attached, it's ok - I'd still prefer a better keyboard, but I can type reasonably well with it. Although even after a couple of weeks I keep find myself going for the "menu" button when I want uppercase, since it is in the place where the shift key should be.

There are situations when you think you should be able to select text but you can't - specifically when reading emails or texts.

The Gmail application forces you to top-post. This can be avoided by using Gmail via the browser, but the app needs to be fixed; I shouldn't have to use a separate application for replying.

There doesn't appear to be an 'undo' option in most places. When you accidentally press the wrong thing on the keyboard and wipe out everything you've just written, this is extremely frustrating.

Now, on to the things which are good about the device...

First is the speed - Android is fast. I hadn't fully realised it initially, since I expect things to happen instantly, but after a couple of my work colleagues pointed it out, I realised that things happen when I expect them to, rather than me being frustrated at badly written sluggish software, like Windows Mobile. Pitted against an iPhone, my work colleagues were impressed, and both of them said it was faster than their iPhones.

And of course, partnered to that is responsiveness - my finger can glide smoothly over the touch screen surface, and navigate through the menus, and the device responds exactly as it should. Whilst it doesn't have multi-touch (as the iPhone does), I've yet to find a situation where I've thought "I wish I could use a two-fingered gesture here". (Though I am still very much in favour of multi-touch as a general technology, and on larger devices where it is useful.)
It wasn't much of a surprise to find that speed and responsiveness are the two key items in Android's Application Design Philosophy.

Extensibility. I've already pointed out that my motivation for getting a Linux-based mobile device was for an Open platform - but there's more to just being Open, it needs to be easy to use too, and fortunately Android is easy to write software for.

Ok, so I've not actually written anything even remotely worthwhile yet to prove this, but simply download the SDK, grab the Eclipse plugin, put your Java hat on, and you're all set to write apps which you can then test on the PC-based Android emulator.

The Android Market still has a relatively low number of apps in it, but already there is a terminal enabling access to the command line, and an ssh client for securely logging in to remote servers. There are also relatively simple games such as Pac-Man, to clever ideas such as "Zombie, Run!" which requires you to go outside, and tracks you using GPS as you attempt to reach your destination without being eaten by invisible zombies.

One thing which I really enjoy is the built-in compass and accelerometer - which allow the device to know exactly where you're "looking". This has been used within the Google Maps Street View to allow you to move the device to look around the area. Quite simple... so why do I like it so much? It is the potential of this, in combination with GPS location, that I can see really taking off. The educational and recreational possibilities that these sensors provide are really exciting.
One example already in the Market is Sky Map, which allows you to point your device at the sky and have the stars, planets and constellations in that area marked out on screen.

Overall, after a fortnight of use, I am very happy with my G1 and Android, and despite the flaws, I wouldn't hesitate to recommend to anyone considering a mobile phone / PDA / Internet device.